Usual disclaimer: please note that imaging Venus very near the sun with an unfiltered telescope is dangerous, do not attempt this experiment unless you are bored by usual imaging 😉

If you still want to try, here is some information on my setup, and my experience using it. When using such setup, be aware, think twice before doing things, go slow to avoid any bad manipulation, and be ready to react quickly in case something happens. There are definitely inherent risks for yourself and your gear with such setup. Everything that can happen is of course your own responsibility.

The 2020 inferior conjunction of Venus was a unique opportunity to image Venus very near the sun. At closest distance, Venus passed less than 15′ from the sun limb. When Venus distance from the sun is below 3° to 4°, the very thin crescent of Venus extends to encircle the planet.

Using a dedicated setup described at the bottom of this page, I have been able to follow the whole inferior solar conjunction of Venus, even on the day of the closest approach. 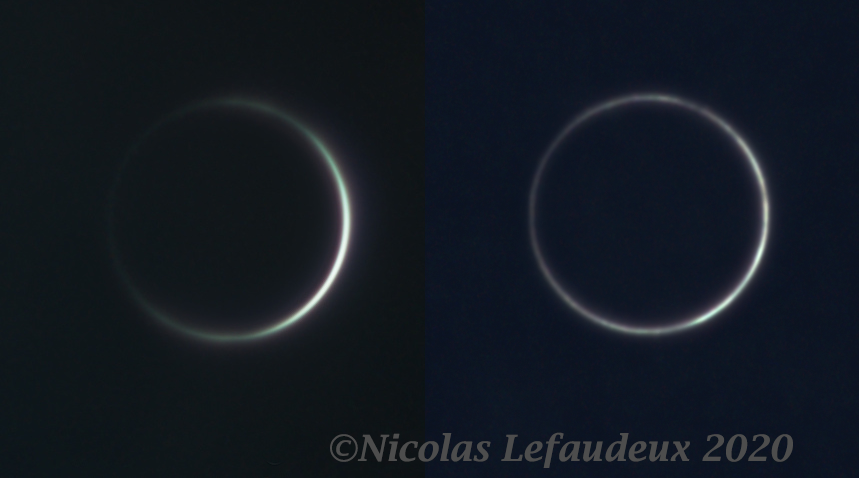 Images of the ring of Venus obtained on June 2nd at 2.4° elongation and June 3rd at 36′ from sun limb

Evolution of the crescent of Venus during 2020 close inferior conjunction

Venus shows up as a thinning, “usual 180°” crescent. Getting Venus in the FOV was definitely the most challenging part at this elongation with the setup. At this elongation, the sun beam could not be blocked by the prism, thus the beam was let to diverge after the focus point, and to go on the ground.

Images obtained on May 26th. From left to right: a good single frame, the stacked image, and stack after histogram stretching. Even stretching the histogram, Venus crescent is still 180° at 13° elongation.

Venus crescent extends, and get progressively longer than the usual “180°”. Getting Venus inside the FOV was easier, with looser constraints on the accuracy of polar alignment. Venus is very bright and very easy to image. Now the sun could be blocked by the prism.

Images obtained on May 29th. From left to right: a good single frame, the stacked image, and stack after histogram stretching. After stretching the histogram, Venus crescent shows cusps reaching about 220° at 8.5° elongation.

Images obtained on May 30th. From left to right: a good single frame, the stacked image, and stack after histogram stretching. After stretching the histogram, Venus crescent shows cusps reaching about 240° at 7.0°.

Images obtained on May 31st. From left to right: a good single frame, the stacked image, and stack after histogram stretching. After stretching the histogram, Venus crescent shows cusps reaching about 270° at 5.5° elongation.

The crescent is now 360° and outlines the whole planet silhouette. The imaging was still easy, Venus is still bright, but the presence of airborne particles and pollens made the registration and post-processing more difficult, especially on June 2nd.

Images obtained on June 1st. From left to right: a good single frame, the stacked image, and stack after histogram stretching. After stretching the histogram, Venus shows already full ring at 3.8° elongation from the sun on June 1st

Images obtained on June 2nd. From left to right: a good single frame, the stacked image, and stack after histogram stretching. The ring is full, with brighter spots visible toward the pole

Animation showing some part of the acquisition on June 2nd. Venus is 2.4° from the sun, the imaging is still easy. The airborne particles are more frequent and causing trouble for registering images before stacking.

June 3rd, day of the inferior conjunction (36′ from the solar limb): irregular ring

After an exceptional 2-weeks stretch of clear blue sky, obviously (!), the weather was forecast to be bad with middle and high level clouds over the most country for the day of the inferior conjunction! The only window of opportunity around my home place was until ~10am local time, before high clouds fill the sky for the rest of the day. So it would not be possible to observe Venus when it is high in the sky, and at minimum distance from the sun in the afternoon.

I started observing early not to miss the chance to image Venus the day of the inferior conjunction.

With the ease of observing Venus the day before, I was expecting the imaging would not be “that” difficult. Yet, for more than 1 hour, I could not see Venus while I knew it was in the field of view. Compared to the 2.4° elongation on the day before, the background sky brightness had increased a lot this day at 0.5° distance from the sun limb. This imposed to use much shorter exposure time, making Venus less visible. To make things even worse, the visibility and interference of airborne pollens and particles was dramatically increased too.

After adjusting integration time, acquisition parameters, focus, position, I finally visually caught a glimpse of Venus in the live image! Venus was barely visible through the loads of pollens, its brightness had decreased a lot, and I must say that I feel lucky to have been able to see it at all, and to image it. The difficulty clearly went from “quite easy” to “super hard” on a single day.

As Venus elevation increased, my captures got better, with lower interference from airborne particles, and lower sky brightness. I obtained my best captures just before the high clouds arrived, around 10:30 am. Venus was then about 36′ only from the sun limb I think I would have been able to follow Venus at even closer distance if the weather would have been good as with the higher elevation, the airborne particles and the brightness of the sky background both decreased even more.

The post-processing of the acquisition is extremely difficult, no standard software can manage to register the images with so many parasitic signal. I had to code some specific processing in order to obtain best image quality. For instance, on this case, the best frames are the ones with the least particles, ie the frames with the lower standard deviation. This provide a very efficient and fast way to select the best frames. Then, the influence of the particles can be dramatically decreased by automatically patching the particles (=brighter pixels) with the average value of the frame. Even if this is not the actual signal, this is “more true” than the bright values, and the “noise” of the stacked image is much lower. Eventually, the knowledge that the image is supposed to be a thin ring is used for a deconvolution-like process to improve the sharpness of the image.

Overall, I am very satisfied that the my work to make this system paid off, the setup worked perfectly and allowed me to tackle the challenge of imaging Venus at such a close distance from the sun! Next chance to image the ring of Venus is for June 2028 !

Stack image of Venus, on June 3rd, at about 36′ only from the sun limb. The ring is clearly irregular, with brigthness variations likely linked to the local transparency variations of the upper atmosphere of Venus. This image is the sharpest ever obtained of the full ring of Venus at such elongation.

Animation of my first capture after spotting Venus: do you see Venus? You can realize the difficulty to spot it with imperfect focusing, a total field of view larger than this crop, and poor contrast looking at the laptop screen in daylight!

Above is an animation of one capture of Venus, with settings optimized to show Venus as well as possible.

Imaging Venus at close distance from the sun is a challenge. Usual approach is to prevent direct sunlight from entering the telescope. This can be done using some sort of sunshade, or by placing the telescope in the shadow of a distant building, so that the sun is blocked by the building and Venus is not. Those approaches have proven effective and enabled many observers to image Venus at a few degrees only from the sun. However, when the distance from Venus is below 3°, blocking the direct sunlight becomes very difficult, as the sun shade or building has to be far enough so that Venus is not blocked too.

In order to be able to conveniently follow the inferior conjunction of Venus, I imagined  a setup that would allow to image Venus without relying on sunshade, very near the sun, and without any limitation on duration of observation.

To this end, instead of preventing the sunlight from focusing in the telescope tube by blocking it before it reaches the scope, I designed a system with a telescope stripped of its tube, and a blocker placed in the focal plane to block the image of the sun. The image of Venus would be isolated with a small field stop, and re-imaged on a sensor. With such setup, once set, the system would track Venus while the sun keeping blocked in the focal plane, so it is possible to conveniently image Venus for long durations.

I designed this setup, using as a sunblocker a prism reflecting sun beam at the location where the sun beam focuses. A ~1mm pinhole makes the field stop. Venus is then re-imaged on the sensor using a microscope objective. I designed all the parts to make this setup and 3D printed them using PLA.

The different elements making this setup are described individually below.

I found that with such setup, the most dangerous situation is when Venus is farther than around ~10° from the sun. In this case, blocking the sun light with the prism is not possible, as the sun beam is too far from the imaging area. In such a configuration, while adjusting the focus of the system, I mistakenly placed my head for a couple of seconds in the focusing sun beam, and immediately noticed an intense heat on my temple. Hopefully, my head was not too close to the focus, and the beam encountered my skin at a grazing incidence, so no injury. This illustrate that the highest caution is needed during all the imaging with such a setup!

Except explicitly mentioned, all the content (images, texts, videos, …) on this website are from the author and under copyright. According to laws about intellectual property, a link to these contents is allowed but any use other than strictly private must have received prior authorization from the author at nicolas.lefaudeux@gmail.com.