On this page, you will find a selection of some of my images of our Moon.

The time of the full moon is definitely one of my favorite time to photograph the Moon. While it is generally considered to be uninteresting due to the lack of contrast and details on the lunar surface, it is a great time to try to capture the discrete but astonishing colors of the lunar surface. This has been one of my long term target, and I have been working on improving my technique to reveal the colors of the full moon for many years.

I eventually manage to get the kind of image I was looking for, capturing the most subtle shades of colors using my C11 and my Nikon Z6, making mosaics of the lunar surface with many frames averaging to get both resolution and high quality color signal, using a very careful calibration, and revealing the color shades with dedicated processing algorithms similar to the ones of the solar eclipse, but applied to the colors of the moon. Unlike a simple saturation boost, the color boost applied is dependent on the scale of the details: for instance the boost of lunar mares is lower than the boost of craters in order to avoid large scale color feature to hide smaller scale color features. This allows to obtain an image showing more nuances of the color variations across the moon surface.

The final colors of the image show an enhanced mix of both the actual global color, and the local color variations.

I was not expecting to me to see so many colors and details, and everywhere over the whole surface of the moon. Some craters have rim with a different color than their center! 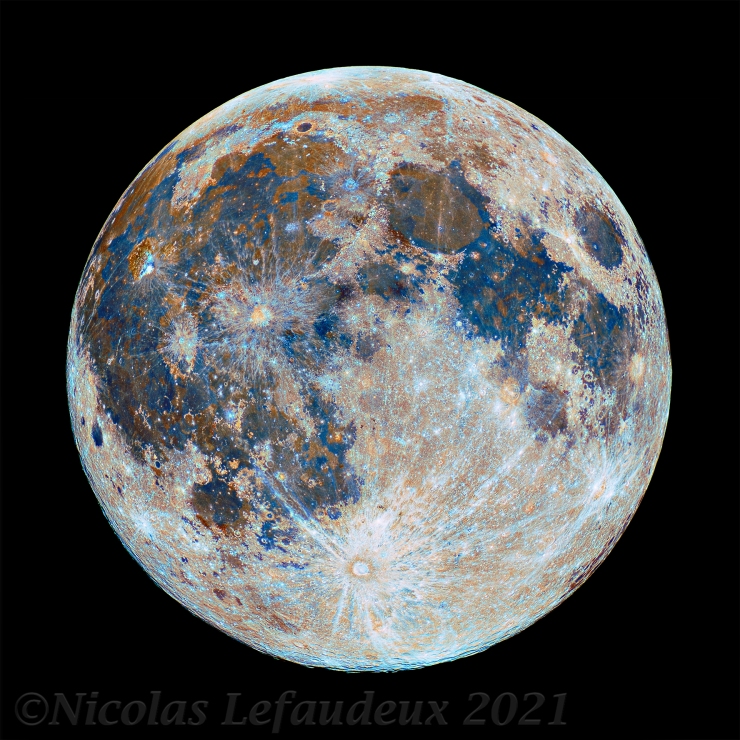 For comparison, my first trials, with my 100mm diameter apo refractor and Sony A7SII, which were limited in terms of quality of the color signal due to the issues of the Sony sensor, especially the color banding was impossible to calibrate and to get rid perfectly. Using the Nikon Z6 eventually allowed me to get the quality I was looking for.

Color enhanced image of the full moon (high res here). This image has been shortlisted for the 2018 Astronomy Photographer of the year award. It was acquired with 100mm diameter apochromatic refractor and Sony A7SII.

I observed this eclipse directly from my apartment in Paris. I put the telescope outside to get it at temperature and avoid any local turbulence. I had been planning on shooting HR images of the eclipse, since my HR images of 2018 Lunar Eclipse were not very sharp because of wind and high local turbulence on the leeward side of Maïdo. This time, I have been able to obtain very sharp images with my 100mm refractor. Quite luckily, I captured the meteor strike flash that was observed worldwide at the beginning of the eclipse while I was doing deep bracketing stacks of the eclipse. I obtained a sharp image with arcsec resolution of the flash that have used by Justin Cowart to pinpoint the location of the impact with most accuracy.

I was in Réunion island, in the Indian Ocean to observe the Eclipse. The Eclipsed Moon was accompanied by Mars located about 5° from the Moon. Mars was in a nearby opposition, shining brightly around magnitude -3. During the maximum part of the Eclipse, Mars seemed brighter than the Moon, which means the full moon’s light was dimmed by a factor probably larger than 5000 by the Earth shadow.

Below are different images that I have acquired during the eclipse. they have been taken with a 100mm diameter apochromatic refractor and Sony A7SII.

HDR image showing different stages of the 2018 lunar eclipse (high res here). All the images have been processed together to have homogeneous and realistic rendering. One can see that the bluish rim of the Earth’s umbra, and the deep red color of the center of the umbra.

The beginning, maximum and end of the total phase of the lunar eclipse (high res here).

During the 2018 lunar eclipse, the moon went directly through the center of Earth shadow (higher resolution here).

Below is a mosaic image composed of 5×3 panels, made with modded Sony A7S + Sigma Art 85mm f/1.4 lens, used at f/2.8, during the totality of the lunar eclipse. Making this mosaic was a real challenge due to the relatively short time available during the totality and the quite large number of panels.

Mosaic image of the Eclipsed Moon with Mars, the Milky way and its nebulaes. The Gegenshein is weakly visible as a glow located between Mars and the Moon. You can try to spot Helix Nebula and comet C/2018 N1 NEOWISE in the higher resolution image here. It was acquired with modded Sony A7S and Sigma Art 85mm f/1.4 used at f/2.8.

Total Solar Eclipse are not only the occasion to observe the sun corona, but also to observe the Earthshine of the Moon’s surface. In such circumstances, the Moon can have a higher elevation above the horizon, resulting in conditions that can be more favorable to see the details of the lunar surface than the usual Earthshine at dusk or dawn. Indeed, very small details on the moon were visible during the total solar eclipse, for instance on my recognize Rima Hyginus, the walls of Copernicus crater, Vallis Alpes, etc…

The pinkish color spots of color on the right hand side of the lunar limb are due to the the bright prominences that scattered around some of their colored light.

The Earthshine is the weak bluish glow on the dark side of the moon that is visible when the moon is a small crescent. It is caused by the blue Earth illuminating the moon. The huge contrast difference between the crescent and the dark side makes Earthshine pretty difficult to photograph, and to process to obtain a natural aspect. I spent some time on this image to obtain an appearance that rendered what one can see visually.

This image of the Earthshine is pretty well resolved, with small details like Vallis Alpes visible. It was acquired with a 100mm diameter apochromatic refractor and Sony A7SII.

Except explicitly mentioned, all the content (images, texts, videos, …) on this website are from the author and under copyright. According to laws about intellectual property, a link to these contents is allowed but any use other than strictly private must have received prior authorization from the author at nicolas.lefaudeux@gmail.com.